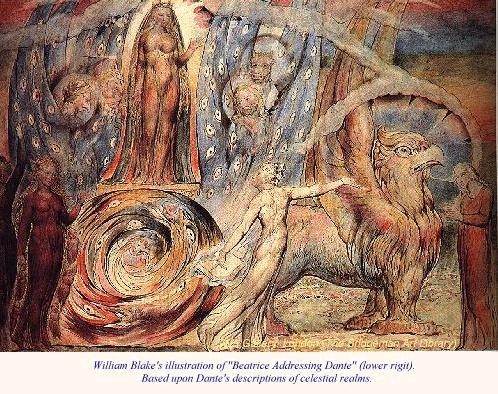 Dante Alighieri (1265-1321) was born in Florence, during a period of intense political rivalry between the Papal party (the Guelphs) and the Imperial party (the Ghibellines). Dante’s family supported the Guelphs and with their military victory a few months after Dante’s birth, his family prospered politically. Years later, Dante was exiled because of his political affiliation, and suffered a great deal from that experience. Much has been made of his persecution as an explanation of his poetry. Equally, a great deal has been said about his love for Beatrice and the influence this is assumed to have had upon his writing. However, little thought seems to have been given to Dante’s classical education and the impact of this upon his greatest work, the Divine Comedy.

He was educated by Franciscan monks and was greatly influenced by scholars, philosophers and poets. He began writing poetry before he was twenty and became associated with the "sweet new style", whereby poets exalted their love and their ladies, in philosophical verse. Dante’s "lady" was Beatrice. Today, we would have little trouble in understanding Beatrice to be Dante’s inner feminine. This becomes very obvious in his Divine Comedy. Nevertheless, there was a "real" Beatrice to whom Dante dedicated his Vita Nuova, a sequence of poems with prose comments in which he describes his fleeting contacts with her, from their first meeting when they were both nine years old, until her death at twenty-four. Rather too much has been made of their earthly love and too little of the mystical significance of their relationship. This article will concentrate upon the esoteric interpretation of the Divine Comedy.

Although Dante’s classical and philosophical education was extensive, we cannot say for certain that he followed specific doctrines. In this article we will see that at the very least, he wrote consistently with what might be termed Christian kabala. We will only examine the broad structure of his work, because he wrote in great detail of both classical and contemporary issues that are beyond the scope of this article.

First, the Divine Comedy is in 3 parts; Inferno, Purgatorio and Paradiso. This is not only a reference to the Christian Trinity, but also a reference to the three-fold structure of the Hermetic kosmos. His classical education should not be underestimated. Secondly, he writes 34 cantos for Inferno and 33 cantos for each of Purgatorio and Paradiso. If the first canto of Inferno is understood as an introduction to his entire work, then there are 33 cantos that relate specifically to Inferno. So what does 33 mean? Obviously, it alludes to the age of Christ at his crucifixion and resurrection. A superficial reading of the Divine Comedy suggests a parallel in Dante’s own life experiences. However, 33 also alludes to the kabalistic Tree of Life. There are 32 internal paths on the Tree and then there is the external 33rd path that leads to God.

Thirdly, Dante writes in terza rima; [a poetic rhyme pattern] aba, bcb, cdc, and so on. Thus the number 3 is present in every part of his work, from the broad structure, to the detail. Fourthly, there is the internal structure of each of the 3 parts of the Divine Comedy. That is the focus of this article.

Let us now examine Inferno. Dante is spiritually asleep and lost in a dark wood. He meets Virgil, the greatest of the Latin poets. It soon becomes clear that Virgil is performing the function known in the mystery schools as the "Conductor of Souls". Virgil leads Dante through Hell.

What does the structure point to? Let us look at the numbers. There are 9 Circles plus the Well of the Giants; 9 + 1 = 10. There are 10 sefirot on the Tree of Life. The Tree also has a 9 + 1 = 10 structure: Keter + Chakhmah + Binah; Chesed + Gevurah + Tiferet; Netzchah + Hod + Yesod; Malkhut (alone). The Tree has a division between 6 upper and 4 lower sefirot. They are divided by the Veil. Dante’s scheme has 6 Circles in Upper Hell and then 3 Circles plus the Well of the Giants, in Lower Hell. Looking only at the lowest Circles, they have 3, 10 and 4 sub-divisions. There are 3 pillars on the Tree of Life, 10 sefirot and, depending upon how we look at it, 4 sub-divisions of the Tree (which correlate to the 4 Worlds). If Dante is making a cryptic reference to the Tree of Life, then the 32 internal paths lead inevitably to the external 33rd and to Lucifer, the Light Bearer. All 33 cantos describe Dante’s experience in the metaphysical place of Earth; Aristotle’s alchemical element of Earth.

Now Virgil conducts Dante across the alchemical Water and to the outskirts of Purgatory. Eventually, after meeting 4 classes of Tardy Penitents, they arrive at St Peter’s Gate. The penitents and the gate are all located in the alchemical element of Air. Dante falls asleep and dreams for the first time. They meet the gatekeeper, an angel who strikes Dante 3 times on the chest and paints 7 "P’s" on his forehead. This is clearly an initiation ritual. In mystery religion terms, he has entered the Pronaos of the Temple. He has moved to the alchemical element of Fire.

Let us pause and note the numbers: 4 classes of penitents correlates to the 4 Worlds of the kabala; 3 + 7 initiation marks correspond to the 3 + 7 division of the Tree of Life. The 3 Supernal sefirot are divided from the 7 lower sefirot by the Abyss. Thus the 3 above are qualitatively different from the 7 below; as blows are different from painted "P’s".

Virgil conducts Dante through the gate. Let us look at the broad structure of what occurs:

Significantly, Dante falls asleep and dreams a second time on Ledge III and a third time on Ledge VII. The 3 occasions of sleeping and dreaming, suggest changes in his level of consciousness. Exactly what we would expect if Dante is describing a mystery school initiation. The Ledges have a 3 + 1 + 3 = 7 structure, which is explained by the kabalistic classic, Sefer Yetzirah. We do not know whether he read this book, but the accumulating numerical structures in the Divine Comedy are too numerous to be merely a coincidence.

Further, on Ledge VI Dante sees 2 mystic Trees. God’s Creation took 6 Days and included 2 Trees; The Tree of Life and the Tree of Knowledge. Genesis Ch 1-3 which includes the whole of the Creation process, is written kabalistically, but is beyond the scope of this article. Nevertheless, if Dante is not deliberately following a kabalistic scheme in his work, then the coincidences are astonishing. On a simple reading of Genesis, God took 7 Days to complete His work. Dante mirrors this with 7 Ledges. When God had finished, He had created a heavenly Paradise. At the end of his 33 cantos (32 internal + 1 external path on the Tree of Life), Dante arrives at the Terrestrial Paradise. Here, Beatrice arrives and Virgil departs.

As the Conductor of Souls, Virgil’s function is to get Dante to the point where his Initiator takes over. That is Beatrice. It is highly significant that Dante’s Initiator is feminine. There is more here than merely the Jungian outer masculine being balanced by the inner feminine; of a poet getting in touch with his feelings. Beatrice is clearly fulfilling the role of Isis, as Queen of Heaven and Savior of the Hellenistic mysteries. Dante’s formidable knowledge of the classics should not be underestimated. This is not merely a childhood romance writ large.

Finally, let us examine the last part of Dante’s work, Paradise. There is a subtlety  in the structure that has been missed by some commentators. Although we have the familiar 33 cantos and their association with the paths on the Tree of Life, we find an internal structure of 2 x 10. Two Trees? This point will be explained below when the kabalistic Worlds are correlated with the structure of Dante’s work.    Let us proceed. Beatrice conducts Dante out of the alchemical Fire and into the Spheres of Lower Heaven. He has entered the Temple of the Mysteries. He ascends the Spheres in the mystery school order and is transformed at each level.

There are 10 levels and they correlate with the 10 sefirot on the Tree of Life. It is far beyond the scope of this article to describe Dante’s experiences. The reader is encouraged to investigate all of this by personal effort. A hint is provided by reference to the Gnostic practice of the Ascent of the Spheres. There is no evidence that Dante read Gnostic material, but the structure and content of his work have a direct correlation.

Beatrice now takes Dante to the contemplation of the Mystic Rose. This is a further transition point and change of consciousness for Dante. Next he is conducted to Upper Heaven, the Holy of Holys of the Temple. Here he beholds the 9 Orders of Angels and the Beatific Vision.

Again a 10-fold structure that correlates with the 10 sefirot on the Tree of Life. The final subtlety is that the Beatific Vision is of Light, Life and Love The mystery of the 3 that is ONE. The aim of the whole process is Salvation.

Let us conclude with the final observation of Dante’s mystical intent. He has written 3 parts of the Divine Comedy but clearly, he alludes to 4 levels of meaning if Paradiso is seen to have two levels. Kabalistically, there are 4 Worlds and there is a Tree of Life on each World. This is how it works:

Dante has described the kabalistic scheme of Salvation in Christian terms. There is no evidence that he studied the kabalistic texts, but the structure of the Divine Comedy is entirely consistent with kabala.